The corner of one of my SD cards broke off and would no longer latch properly in the cameras slot, it was time to either throw it away or repair. I opted for repair. 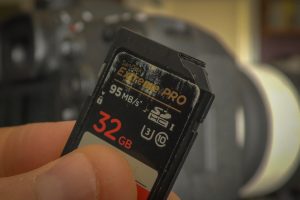 For the repair I used some Poundland two part epoxy resin as this can be used to fill in the missing section and when fully cured, after 16 hours, is just as strong as the plastic its replacing.

I started with a sheet of glass from a picture frame to give me a flat surface, upon which I stuck a short strip of electricians tape as the epoxy resin wont stick to this, next I applied a small blob of resin to the tape over which I placed the SD card to cover the entire broken corner that you see in the photo then squeezing down to push out the excess. I then left it for about ten minutes to let the glue set a little when I could push the glue up and fill in the corner.

I then left it for about an hour to go solid but still pliable, I then peeled the tape off from the glass and glue. The next stage was to trim down the excess with a scalpel, this tided up the outer edges but still left a ridge by one of the contacts, in the morning I removed this by carefully filing it away. I finished by cleaning with isopropyl alcohol.